How To Avoid Plagiarism And Copyright Issues While Writing A Research Paper? 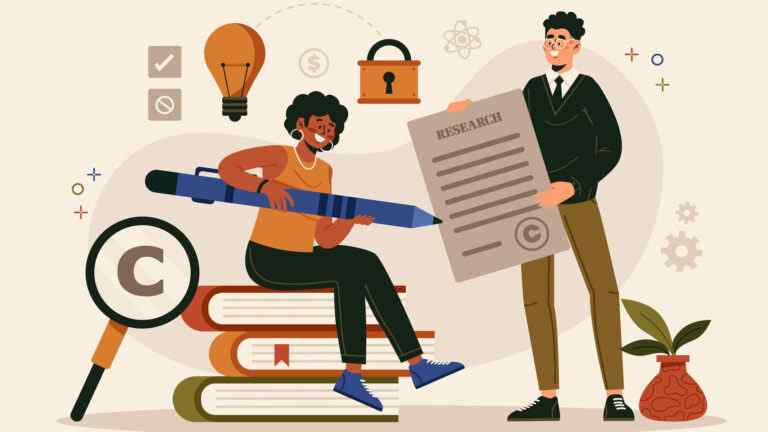 Your creativity is your identity. Ideas can probably be taken and developed but using a substantial part or heart of Research is neither legally right nor ethically allowed. – R.G Anand deluxe case.

How often have you referred to excerpts from different sources to write your research papers?

Talking about which, research papers can be doctrinal or non-doctrinal, based on factual information or data collected.

Ever wondered that you are stepping into the dangerous zone of Copyright Plagiarism?

Every Research is different and unique in its

One can agree that a research paper is not novel writing- not every time, new facts can be brought into the paper when the concept tends to be the same. What differs from one to another is the style, structure, and language that makes one paper different from another.

Research is otherwise spelled out as re-search: re can be interpreted as reviving, rewind, revise, re-do anything and everything under the sun; when a search is conducted again to improvise or modify the existing facts. The subsistence of Copyright is questioned during the explicit reuse of the work already published in the domain.

No work is made out of the vacuum. Every Research involves the same or more degree of

to research and submit the paper.

A copyright researcher must understand these two key theories while writing the research paper to avoid plagiarism.

Use of copyrighted images and pictures in the research paper

To overcome these two theories’ dilemma, a lifesaver theory was developed for the Researchers and it is called

The doctrine of Fair Dealing or Fair use

It was proposed by the legislatures in the Copyright Act, 1957. The Act beautifully lays down the application of the doctrine and is backed by the various judicial precedents.

Article 13 of the TRIPS Agreements

It permits the use of copyright work to an extent the use of work does not prejudice the authors’ legitimate rights. It states that for

Section 52 of the Copyright Act

It states the situations or the circumstances under which the doctrine may be applicable. To give a gist, work can be bought under the exception of fair dealing if,

Fair use of copyrighted material can be allowed with a literary, dramatic, musical, or artistic work to report ongoing events in a

The Act has, however, not described the meaning of fair use or what are the ingredients of fair use. Therefore Indian Courts have time and again applied the doctrine based on facts of each case.

In Hubbard vs. Vosper,

The Court made a clear stand that it is difficult to define what is fair dealing; the definition may vary depending upon the degree of work used.

To understand the ingredients of fair use, references have been taken from U.S and U.K laws. In the famous case of a very restricted meaning was given to the term “Fair Dealing.” The Court laid down:

In this case, the Court stated that a parody should not constitute copyright infringement unless misused or misappropriated. In the same pretext, the Court established a three-step test to be considered to analyze the infringement of copyright:

The Academy of General Education, Manipal v B. Manini Mallya,

The Court held that when fair dealing is used in the cases where work is used for private study including but not limited to Research,………..(.), infringement cannot be claimed.

As much as fair dealings are allowed in research papers, substantial copying is still restricted.

Every researcher has to keep in mind that every time it uses any data, translated works, literature, lectures, abridgments, or any other articles from journals published, it has to mention the source of the content was extracted from. This will help avoid any infringement or plagiarism conflicts.

Lastly, no copyright persists in works in the public domain, so researchers are free to use them. While using any material from known or unknown sources, the researchers have to maintain and protect the authors’ moral rights, give them due to credits, and most importantly, avoid using the entire work.